so this is a new set of posts dedicated to my maker side of things. no promises will be made regarding how many or how often these posts will be made.

and this first post is about restoring tools, specifically old power tools. last year my brother in law gave me a bunch of tools in various state of conservation. the first one I kinda fixed was an old German made drill press. 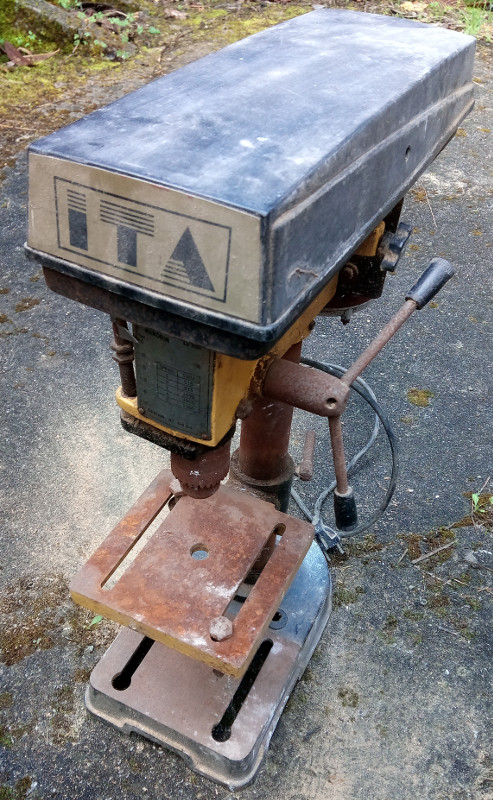 and I say “kinda fixed” because I’ve just made it funcional again and not properly fully dismantled, cleaned and repaired. that will eventually happen some time in the future.

the next tool I tried to mend was a hand planer with missing parts. soon I scraped the idea as it was way too dangerous to try anything whitout those missing parts. next on the list was a router.

recovering this router was a very difficult task as most screws were rusted and mostly broke when a bit more force was applied. after a couple of hours messing with it, something came off the main shaft while I was trying to get one bearing off. so to the trash it went as well.

another batch of tools arrived and, from those, two were good enough for me to begin another salvage operation, a bench grinder and a larger hand planer. both were in an awful state but their motors worked fine so they showed some promise.

starting with the bench grinder, the obvious problem were faulty ball bearings. as a side note I can now say that ALL old tools really need just new ball bearings, new power cables and a coat of paint.

this particular model was very easy to disassemble and very difficult to brush clean. fortunately, it was made of two identical aluminium based covers which I spent the best part of an afternoon cleaning up with a metal brush. 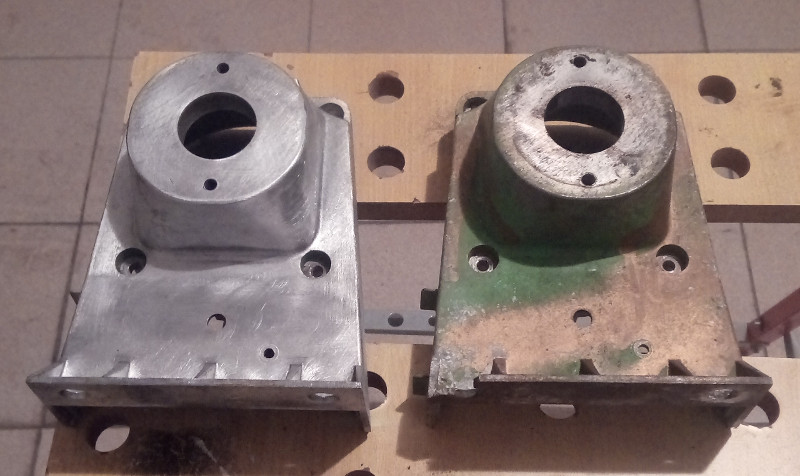 after being fully clean and primed, both parts received a good coat of orange paint. 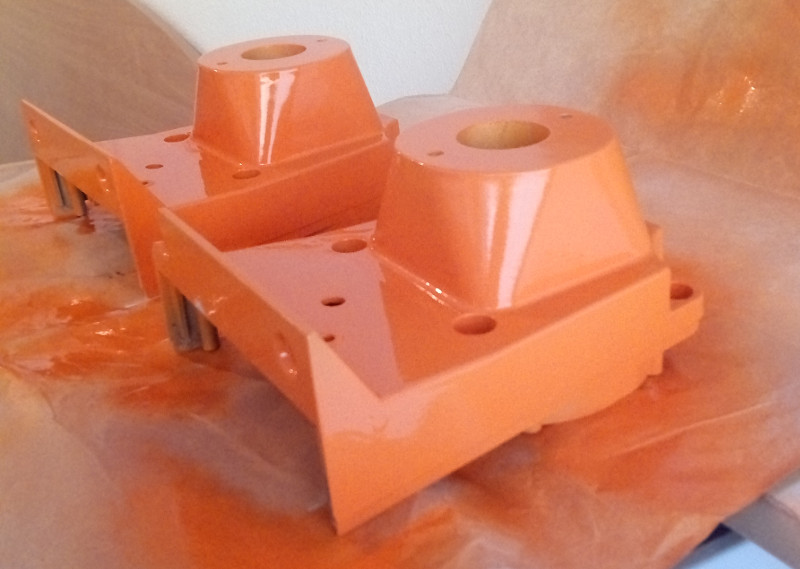 progress continued on the bench grinder in where I cleaned up the main shaft, removed two rusted bearings and inner sleeves. as all bench grinders are, one nut is regular, the other has reverse thread. it turns out the thread is metric, M12, none of that “imperial” bullshit. now I need to buy the M12 reverse thread which will cost a lot (5€ or so).

so, one day ball bearings arrived and I could do a test fit. it all went well as expected. well not everything, I’ve somehow managed to scrape and nick the paint in two places which made me mad at myself for being so careless.

the original power switch was in bad shape so I bought a rough hard-moving thing, designed and printed a 3D model in OpenSCAD for the support, filed and sanded it to fit its location on the machine.

a bit more work on the power cable and internal wiring, plugged it in and BAM, the differential tripped. I must admit my surprise as everything was doing well, good and dandy. 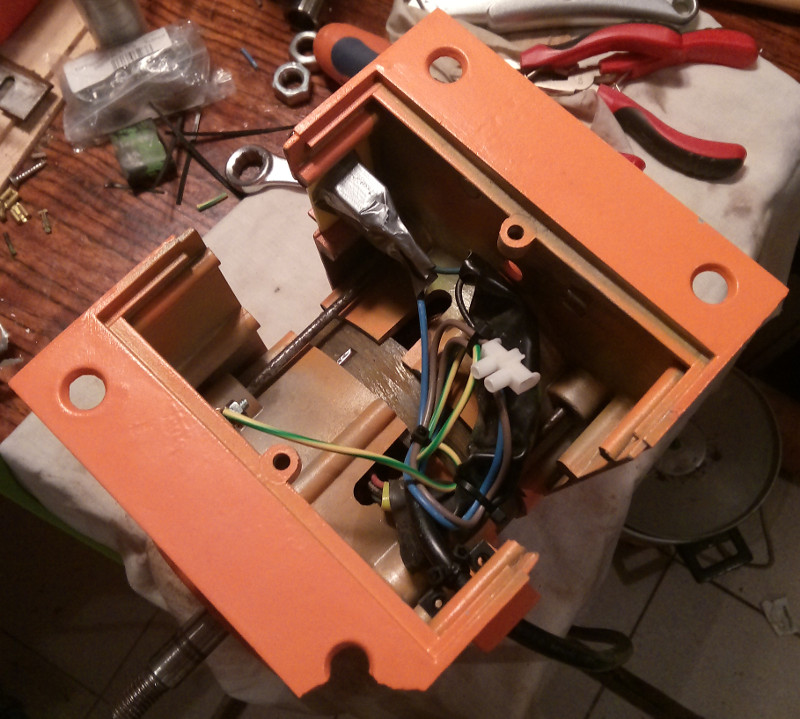 it turns out that something was giving way to the chassis, I have not previously made the motor running with ground pin attached and that the metal pieces around the stator had 105V. something VERY odd was happening!

so, without admiting defeat, I disassembled the whole thing again and started to look for anything out of the ordinary. soon enough I spotted something odd, a single strand of wire outside the shroud where all other wires were. 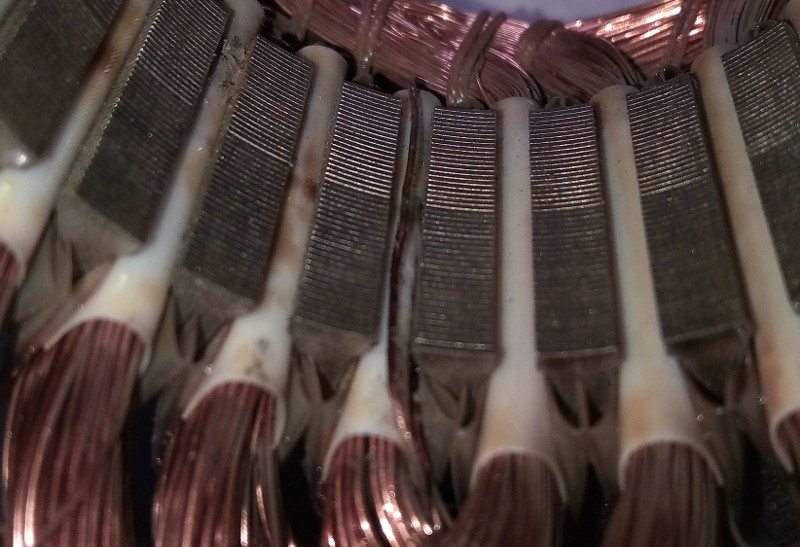 scratching my bald head I said “WTF? this problem existed since this piece of shit was built!!”. how the hell did this work without any problem for so long?

granted, I have moved it from side to side, brushed the interior to remove a lot of accumulated dirt and cleaned it with a cloth. still, this was a problem that I could solve in a very simple way.

my first though was to glue it in place but a) I had no epoxy glue b) this would eventually heat up while working and any glue can melt. plan B called for a more engenious solution, open a small channel and force the wire through it. 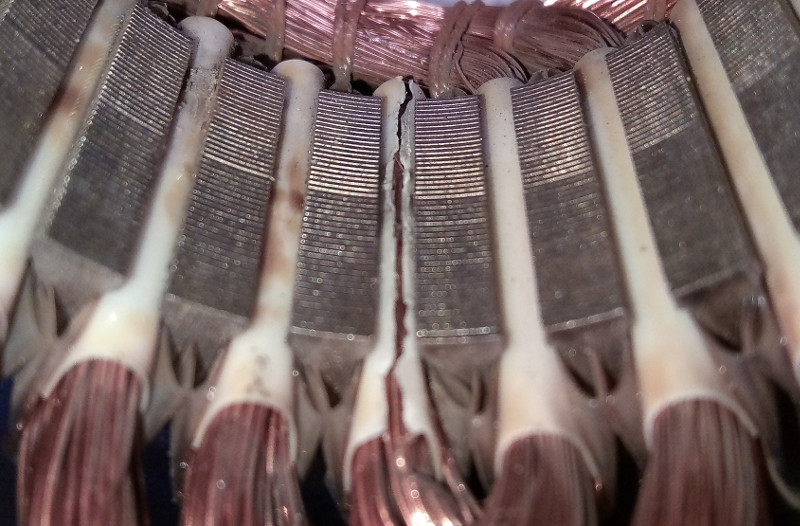 and there we are, this machine is fixed, waiting for the grinder wheels and other attachments.